QDN is proud to announce, in the year that we celebrate our 20th year anniversary, the Governor of Queensland as our Patron.  In her role as Patron, Her Excellency the Honourable Dr Jeannette Young AC PSM will support our work and be a champion for people with disability across our state. 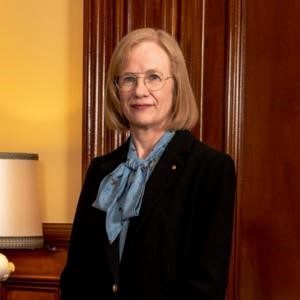 Dr Jeannette Young and her husband, Professor Graeme Nimmo are proud to serve all Queenslanders.

The Governor was born in Sydney in 1963, eldest daughter of Dr David Young and Mrs Lilly Young. After graduating from Medicine at Sydney University in 1986, she commenced her medical career at Westmead Hospital. During that time, she married, had a daughter, Rebecca, and transitioned to Medical Management, completing a Master of Business Administration at Macquarie University.

In August 2005, the Governor was appointed to the role of Chief Health Officer for Queensland, with responsibility for leading the State’s preventative health and public health agendas, including response to public health emergencies. In January 2020, when the COVID-19 virus outbreak was declared a pandemic, the Governor became the State Health Incident Controller.

During her medical career, Dr Young had specialist qualifications as a Fellow of the Royal Australasian College of Medical Administrators and as a Fellow by Distinction of the Faculty of Public Health of the Royal College of Physicians of the United Kingdom. She was also appointed Fellow of numerous other eminent education and research institutions, has received honorary doctorates from two Queensland Universities, and has received an Australia Day Achievement Medallion, as well as a Public Service Medal.

Her Excellency was sworn-in as the 27th Governor of Queensland on 1 November 2021. We are extremely happy to have the Governor as our Patron.